Kim started playing netball at age 11 eventually progressing through the ranks to play WD forMerseyside County in her early twenties. During this time she became a prelimary umpire. In 1996 Kim gained her B Award for umpiring and has passed her A theory umpiring paper. She is a Middlesex umpire mentor and tester.

She has helped set up and run netball leagues inLondon. Her enthusiasm, absolute passion for the game has been influential in bringing more and more players, umpires and coaches into netball over the years and has become a successful netball mentor helping others.

She has played for clubs in Surrey, Middlesex, Merseyside and Essex Met. She is currently head coach and umpire for the Cumberland London & South East region team based in central London. She also plays for netballpost.com in two leagues.
In her spare time she has been named as one of the most influential people working in the financial services industry, she writes a regular newspaper column and has provided consultancy to over 100 financial service companies including Microsoft and Marks & Spencer. 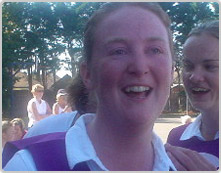 Rose burst into the world of netball when she started a works based team called Synergy.

Synergy quickly moved from the lower divisions to the top and Rose was praised as leading the most improved team. Synergy entered the UK Corporate Games in Newcastle and Manchester and went on netball tour to Pontins in Prestatyn and Hemsby.

She is passionate about netball and plays many positions. Rose has played for a number of netball teams in the Essex Met and Middlesex leagues. She is a B award umpire working towards A having passed the A theory paper and has umpired England players and National Talent games. She is also a Assistant Level One Coach
She is a captain at Cumberland, social secretary and umpiring secretary which is no mean feat with over 80 players within the club. Her team plays in the Middlesex and North London league and everyone seems to know who Rose is due to her passion for netball.
When she has any spare time Rose enjoys snowboarding, running and quality white wine. Rose runs her own successful London based recruitment company recruiting seen at www.projectrecruit.com

Rob Hamilton business adviser: netballpost.com
After working as a nurse in Glasgow for some years, Rob moved to London as an IT consultant. He got interested in netball after a colleague asked in desperation if could play in a mixed netball team at lunchtime. When during his first game as Goal Keeper Rob asked what he should do, he was told to “jump up and down”; he did in a pair of deck shoes and later wondered why his knees hurt!

Rob soon caught the netball bug and started playing nearly every day either in the evening, lunchtime or both in London. He set up his own team called the Untouchables that quickly became champions of the LK Evening City league and took over the organisation of the City of London League, an 8 division league that plays at lunch times. He runs the www.netballpost.com team which is current top of division one in the Old Street league.

Rob is an A award umpire and past Middlesex umpiring secretary.

Alicia Cross Netball Consultant: netballpost.com
The Austrailian Alicia Cross (known as Scoot) started playing netball at the age of 6. Originally from a small town in South Australia, from age 14 her parents drove her 2 hours each way to Adelaide to play netball. Alicia played for Garville Netball Club playing at the top level for her age before switching clubs to the Adelaide Cougars who she represented at State League level (which is a higher level then the UK county level).Whilst in the UK she worked with Premier Training to become a qualified Gym Instructor and Nutritional Adviser.Currently playing for Cumberland Netball club in Camden London, she has never enjoyed her netball more. Whilst the netball is at a high level, a beer or glass of wine is standard after games. She also plays mixed social netball for MNA and fills in regularly in the London City leagues.

Alicia is currently working with Netballpost.com to increase the knowledge of netball in England and in Australia. She hopes to raise the profile with both men and woman, young and old as it is a fun and exciting game that is starting to receive the profile it deserves.

Our thanks for advice and support from:

Netballpost.com accepts no responsibility for information provided by third parties as any links to third party sites are provided solely as a convenience to users and at your own risk.

We hereby give permission for the downloading, printing, and temporary storage of one or more of the documents or pages retained on this website for personal use. The reproduction or transmission of the contents of this website is prohibited without the prior written consent of netballpost.com.

Players Life Cycle | Umpires Life Cycle | Coaches Life Cycle | Where can I play Netball | Starting a new team | Message Board | Rules Forum
Tournament Recommendations | Social and Competitive Netball | What Should I Eat | Now and the Future | History of Netball | About Netballpost.com
Around the World | Books about Netball | Netball Links | Legal Information